While there are not any real clear cut symbols such as the swastika involving the Nazi’s, there are some signs of different symbols during these awful times in Darfur. Like most violence these days occurs, the genocide mainly started over oil and land. There were already tensions between North and South Sudan at the time during the 1980’s and then to make things worse the Sudan government and many other international country became interested in the fact that oil may be found in Darfur. As the war between north and south Sudan kept up, everybody ignored the fact that attacks in Darfur were occurring. Even after a peace agreement that ended the civil war between the north and south in 2005, Darfur still got ignored. Darfur was already lacking a good government and was underdeveloped at the time when the “Janjaweed (Arab Tribesman)” were killing many of the people in Darfur and still are today(William Mitchell College of Law). The Picture below shows an example of the Janjaweed and some of their violent traits. 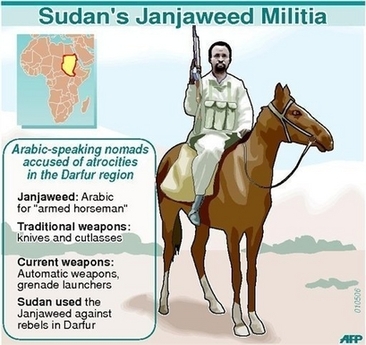 Here is the Sudan flag when South and North Sudan agreed on there treaty and had some peace. However this did not help the people of Darfur because they were forgot about and ignored by the government.